Weekend on The Somme - Day 2

After the long day the day before I was feeling a little tired and after the early night,aided by two pints of Monaco at the restaurant, I slept most of the night. I set my alarm on my phone for 0800. By the time I had showered and got changed I got to breakfast to find all my travel mates already there.

We had a good chat over breakfast and by the time we were ready to leave it was easily 0945.

The first stop was to be the site where the Red Baron was shot down. Somehow we had missed it last year.  It would be easy to miss as it is simply a small notice board at the side of the road. 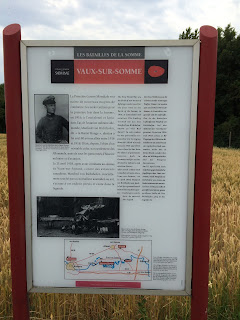 The next stop was only a few miles along the road. Grove Town Cemetery where David wanted to look up one of his relatives buried there. Although from Google Maps the cemetery looks to be in the middle of farmland, what it didn't show was the rough track to get there. Unlike the Pals, we couldn't miss this one. At least Neil got to take his new Honda Cross Tourer "off road"!! 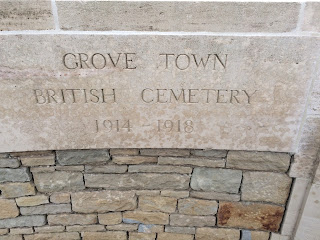 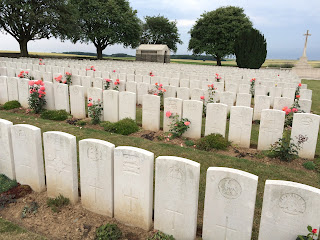 From Grove Town, we retraced our steps back along the bumpy track, across the little "bridge" between the two huge puddles back to the main road.
We turned left and in just four miles we arrived at the Froissy Dompierre Light Railway, one of the last sections of trench railway left.
Although we found it easily enough, in fact right to the door, we were about 3 hours early.  When I looked on the website I hadn't noticed that it opens only at 1330! So I took a couple of pictures to show we had been and we set off for Peronne and the Historial. 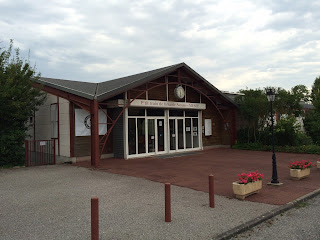 The ride to Peronne was past a lot of war grave cemeteries, some small but far too many large with the white stones of the British and the white crosses of the French bright in the sun.

Once again, TomTom took us right to the door and we stopped in the parking directly opposite to the old castle that houses the museum and historical.

I have been before, but the displays evolve and so it was worth going in again. But first. A drink before we went on/. Cal booked us a table for 8 for lunch for our return. 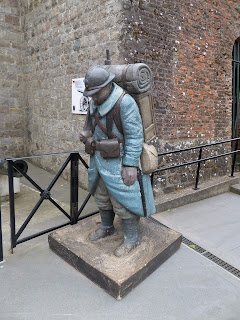 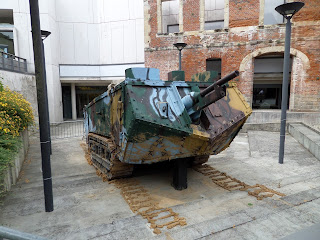 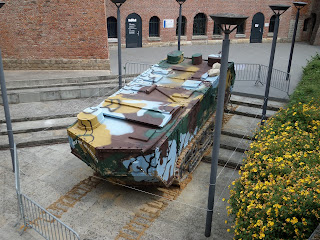 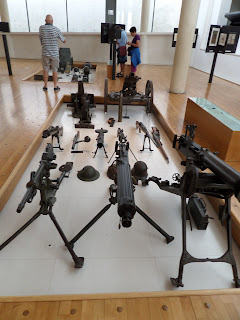 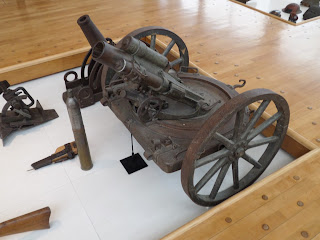 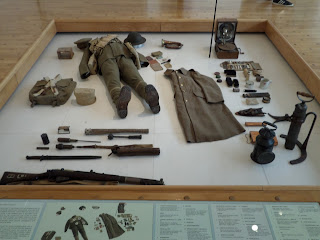 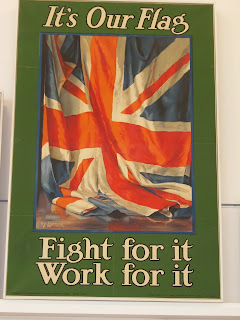 Some of the displays give an idea of the casualties and the effects of the Battle of the Somme and also the statistics of each of the belligerents and the Russian Army on the Eastern Front. It came as a surprise to me that Germany, France and Russia had standing armies numbering 4 to 5 million men at arms. The UK had 380000 full timers at the outbreak of war in 1914.

Once finished we headed back for lunch.  The railway being closed had saved us about an hour and so we had a more leisurely lunch. I had a salad! 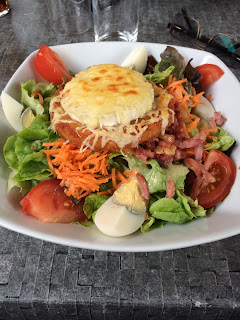 Time to saddle up and head for the last stop and to say goodbye to Lainy and Ken Sole, who were heading east to Luxembourg or somewhere!

The Souvenir Francais at Rancourt is a large French cemetery and attached chapel. The chapel has a small museum inside. 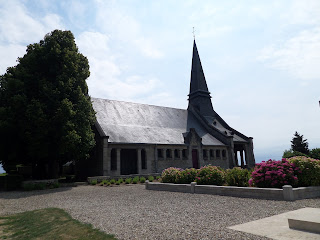 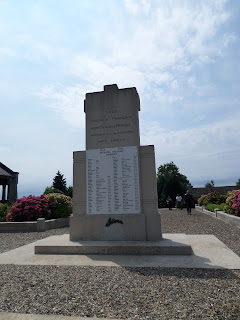 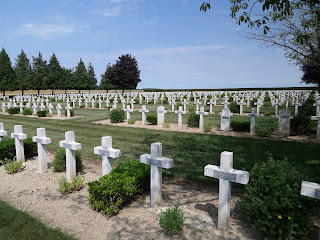 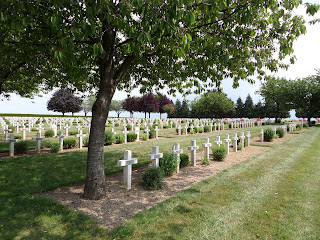 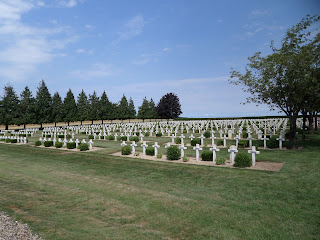 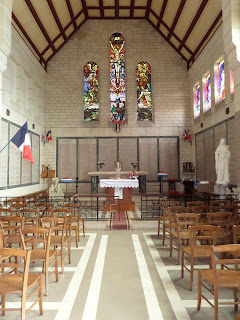 We were still about an hour ahead of schedule and once we had made our goodbyes to Lainy and Ken, we set off for the A1 and A26 back to Calais.  Here as with the way out it went a bit tits up.

Now with six bikes in the group we arrived at the toll plaza to take a ticket. It seemed we were all through and I led onto the A1 north.  Ken Fulton and David needed petrol before their smaller tanked Suzukis would make it to Calais and so I planned to stop at one of the service areas to the north of Arras; the second after we joined the A26.

We sailed past Arras and Vimy Ridge and the large Canadian monument to the right when Ian came alongside making some strange gestures that I took to mean we had lost two bikes. I decided to make the fuel stop and wait there.

He shot off ahead and I led Ken and David to the fuel stop. All three of us filled up.  With the exchange rate, a litre of French 95 unleaded worked out at just over £1.05, some 10% cheaper than at home.  So why not fill up too?  ;)

There was no sign of Ian and we waited and waited and heard rather than saw bikes go past on the autoroute, By the time we exited the petrol/gas station and got on the A26 we had lost sight (and sound!) of the bikes.  We plugged along at 70-75mph until the toll near St Omer. As I approached the manned toll booth to pay, I saw Cal and Neil the other side putting their gloves on. I tooted the piss poor Rocket horn and they pulled away. By the time Ken and David were through we had to follow on behind. Eventually catching them up on the spur motorway to the Port of Calais.

We were early still and were loaded onto a boat an hour earlier than we had booked. Only to find Ian's BMW already tied down and no sign of him!

We eventually met up again in the self-service where David, Ken and I decided to stay as we had a seat and places to put the pile of jackets and helmets.  The others went off to find other seating.

In the end it was another good trip. I think everyone enjoyed it and we are already looking at going again next year for the 100th Anniversary commemorations.