Planning has begun on the first run of the year. This trip will be to Vimy in Northern France.

This year is the 100th Anniversary of the Battle of Arras, and in particular the Canadian assault on the enemy held ridge at Vimy to the north-west of the city.

I have been several times before, lastly in 2014 and in 2015 I had a heart operation just days before it took place! I was unable to go last year even though it was a Saturday. 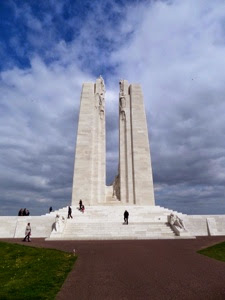 This will be a Johnny No-Mates trip as we had originally planned to have it as a Meldrews event but when we found that Eurotunnel had no day tickets to sell as it is the week before Easter, we dropped it.

The date is as always April 9th and this year it is a Sunday.

I saw on Facebook that one of the bike groups I joined a while back are having a day trip to France on the 9th to have a hoon around and lunch. So I got on the Eurotunnel site and saw that day trips arr now available. So I booked myself on the 0850 returning at 2020. This should give me time to get here in good time and then get away again after the shuttle buses take us back to the parking and then the 80 miles ride back to the port.