The battery was ordered on the 14th January in the afternoon and too late for the "next day" delivery. It arrived 16th January afternoon. Too dark to fit it there and then so it had to wait for the weekend.

I ordered it from www.motorcyclepartswarehouse.co.uk.  I chose a good time to buy it. Before Christmas when I checked online the best price was around £65 plus delivery with two companies very much the same price.  After Christmas MPW were selling them delivery inclusive for £63.49. Winner winner chicken dinner!

I have to say their service is good. Plus the packaging was very good. Wrapped in a plastic postage bag, surrounded by bubble wrap and under that a layer of "slashed" cardboard. 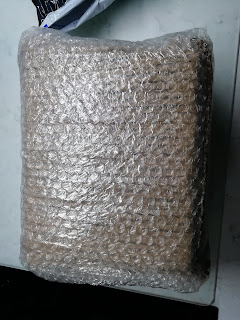 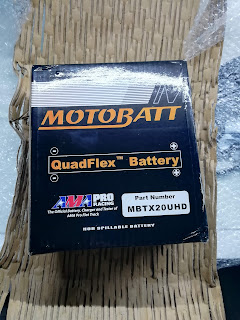 The only disappointment is that it was black as per the main photos on the Motobatt website. I had wanted yellow! Still no matter, it can't be seen unless the front seat comes off.

Fitting as they say is a doddle. In the box the battery comes with a side spacer that has covers for two of the terminals, both +ve and -ve, and another for the bottom.

Once the old one was out the Motobatt is the same size less spacers.  I had to change the blanking plugs over from the terminals to get the exposed ones in the right place.  Fitting the brass contacts is a doddle.  Even I could do it!

Once on and the retainer strap in place I replaced the cover and the seat.  Fingers crossed.

Turned the key and waited for the clock needles to sweep round and back..... Starter pressed.

Bang and Pepé burst into life.

With the outside temperature hovering at about 1C/33.8F I let it run a bit and then decided against togging up and going for a ride.  Both the cars were covered in frost as it was.

Why do it now?  Pepé has the MoT on Saturday morning at Laguna in Ashford. Last year it was freezing cold. I expect it will be this year too.  If I had my way I'd do it the Spring but when it was new Laguna registered it at the end of January as the demo bike.  So the MoT is annually ever after!

InvictaMoto
Riding since 1973 when I had a Vespa SS180. Currently own a 2015 Triumph Rocket III Roadster. Over the years I have owned bikes across the spectrum from grand tourers to race reps to dual sport/adventure to cruisers. Married to Claire and we have a patador dog called Reggie.